Discover the latest Infinitode guide for towers and levels and their features & tactics.

This game contains 12 types of towers for destruction and influence on opponents, and each has its own characteristics, pros and cons, this Infinitode guide will help you with this on Apkguides

Some turrets inflict damage to the enemy with deferred effects, for example, frozen opponents have a small snowflake icon, set on fire – a light, poisoned ones are marked with a green droplet.

Our guide on Infinitode will help a lot:

In the infinitode guide, It is a basic weapon in Infinitode Apk. It is cheap with a decent radius and damage, extremely fast after pumping.

The first 100-200 waves may well be the main tool, depending on the chosen tactics. Does not hit air targets.

It has a damage multiplier that increases as the level of the turret rises and does not have the ability to impose additional effects on opponents.

This is a very whimsical weapon in terms of pumping because without upgrades it is very slow and ineffective, but after pumping the turning speed, radius and damage becomes the ultimate tool of destruction.

Usually effectively near the end of the map to achieve the most nimble and most survivable opponents.

He also knows how to hit air targets, which is a definite plus of this tower.

As the name implies – a slow weapon. One of the backbones in terms of tactics, with an incredible damage radius, which is focused on the destruction of individual opponents.
It’s effective against “thick” mobs because the damage even without swinging inspires, but without the buildup of shooting and turning speed makes little sense to buy and install.
It is extremely effective on large and medium-sized maps, on small maps the benefits are doubtful.
It is worth placing either in the middle of the map or near the end, to eliminate the last mobs.
So with the help of our infinitode guide and hints, you get information about the slow weapon.

In infinitode guide, It is a weapon exclusively for air combat, which immediately makes it an extremely niche solution.
It has a large radius of fire and quite effectively hits a large number of air opponents, with proper pumping,].
2 such guns will be able to protect most of the game from air attacks.
Has a chance to set fire to the enemy, for inflicting additional damage.
As you level up, the chance to set fire to the enemy increases.

It is quite an effective means to weaken mobs in Infinitode guide. It is advisable to place several units at a decent distance from each other near the top of the map and rock the firing rate in order to hit as many enemy units as possible and bring them pretty beaten to the middle of the map.

It does not act instantly but takes health for a few seconds.

A tool affecting both ground and aerial targets the main feature of which there is a chain reaction. The ability to catch one shot, multiple opponents. 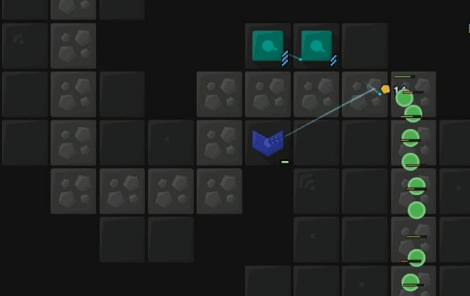 Not the most useful weapon in the game due to the low damage, but in conjunction with frosts can be pretty well used.

Most effectively works together with the Freeze and large groups of opponents. In the process of increasing the level increases the length of the chain reaction.

Without swinging, it looks like almost the most ridiculous weapon in the game.

It is slow-moving with extremely slow projectiles, but after increasing all the parameters it becomes an ultimatum weapon due to damage by several opponents and quite good damage at once.

It may well become the main unit of protection in your arms armada in view of balance and quite a good price. As the level increases, the radius of the explosion of shells increases.

One of the most useful defenses in Infinitode guide tactically does not cause any damage, but it slows down all kinds of opponents.

Properly placed and pumped freeze can slow down any wave of the enemy, be it an air or ground enemy, while the guns will clear their rows.

The irreplaceable tower on any map. It is recommended to have at least 2-3 frosts on any map. Extremely expensive improvements.

The radius of destruction is small, the damage is also not impressive, but this is probably the most useful tower in the game.

Why so? Yes, because the base has a 10% chance of stunning ground opponents.

The main tactic is built around this turret, after improvement the chance is even higher and, with proper buildup.

The attack speed can literally stop a good number of opponents in place, and the stopped enemy is a dead enemy.

It is recommended to place at least 3 units of this tower on any map and swing the chance of stunning and attack speed to the maximum.

As the level of the cannon increases, the time for stunning the enemy increases, which is an extremely useful bonus.

A wonderful tool for hitting several opponents at the same time both through and in general with a salvo all over the radius.

It is with proper pumping becomes quite effective against opponents of all kinds, though you should not forget that projectiles fly randomly and even pumping accuracy is not will give 100% accuracy of hits.

It does not touch the air targets. In the process of increasing the level of the turret, the number of simultaneously-produced projectiles increases.

Perhaps the most useless weapon in Infinitode guide for the reason that shoots a wave of shells into a group of opponents through, such Splash, but with a narrow radius of defeat.

With a good buildup, this tower is quite good, but, subjectively, its not worth the money.

It can be effective against a mass gathering of frozen/stopped enemies, but in other cases the benefits are doubtful.

In the process of pumping increases the angle of flight of the shells and their number.

A weapon that completes this infinitode guide, has a very large base radius of destruction, this is where its advantages end.

Produces single missiles at targets for their money – not the most sensible choice, even with a full buildup.

In fact, there is a rocket analog sniper rifle, not the best analog, it should be noted. It has a radius of the explosion of shells and time guidance.

In general, as this Infinitode guide shows, there are plenty of protection tools and you can choose defense tactics to suit your taste, there cannot be one universal way.

This game is still under development and is still looking for its perfect balance, but now it all looks like a complete and extremely exciting project that has great potential.

You can play infinitode Apk easily by following our Infinitode guide on the latest gameplay. This guide will cover all secrets and cheats about how to play this Apk very well.

There are no cheat or hack available for this game. So don’t waste time on searching about how to hack or how to cheat infinitode game. Just follow our infinitode game guide for getting everything easily.

Here you will get information about how to farm money automated and how to play autopilot?

You know automation is key and its king of everything. Learn through video guide for infinitode:

What to upgrade in infinitode?

So you must download upgraded Infinitode Apk version for good experience.

In this Infinitode guide, you can learn completely about all towers. This article is best for new and pro players.