What to do in the last empire war z? Overview

In a world full of toxic zombies, it’s up to you to fortify a base, build an army, and take back the world for you. Join with other players to fight for the same cause, and be careful of enemy players who are trying to hurt you.

You can easily save your empire fighting & firing the army of zombies that want to loot the resource in this Apk war game of base construction.

You can make a perfect kingdom & become a friend of the empire’s allies to fight zombies by following the last empire war z guide and walkthrough about how to attack?

Zombie Battle Troops With Members of the Alliance

What are the battle Mechanics of the Last Empire War Z?

In addition, although at the beginning we will have to defend our base very often, later on, we will be able to launch the offensive and attack other settlements and hordes of zombies.

☆ International platform game, participate in wars from all over the world.

☆ Develop your own city, and train a potential army.

☆ A large number of zombie types, experience butchery battles against them.

☆ In ordinary times, you can take the role of a bandit, a pacifist resident, and even a diplomat of safeguarding resources, you can also be a zombie

☆ See the battles in real-time, see the real outcome of the battles by following the last empire war z guide. Last Empire-War Z is a strategy game with management touches, which has an interesting setting, a pretty good graphics section, and a lot of references that will especially like fans.

One of the games that we have seen with aggressive promotions is Last Empire War Z: Strategy, in fact, this was the reason that led me to try it. Throughout this article, we will guide you by writing the last empire war z guide and give you tips and tricks so that you can advance correctly.

Throughout this short guide, we will give some indications with which to get a good performance of resources without using a diamond. Of course, the game requires daily dedication.

Join an alliance with active players


The first piece of advice I can give you is that you reach level 6 as soon as possible. Once we reach this level (something we get relatively quickly) we can join an alliance.

When we are part of an alliance we enjoy several advantages, but the most important is the protection that our colleagues will give us in the face of enemy attacks or they will even be able to send us resources.

How to choose the Alliance in the last empire war z?

It is important that you choose the alliance to which you join, at first it is not necessary to join the strongest alliance, but one with active players.

This point is important that players are active since they can help to expedite the tasks of building construction, technology research, healing troops, etc.

How to choose the correct number of production constructions?

During the development of our city, we can build different production buildings, such as farms, oil wells, steel mills or alloy mines.

The most advanced users manage several cities at the same time, for this, we will need to link each account of Last Empire War Z: Strategy with a different Facebook or Google Play Games account.

How to manage different accounts wisely?

When opting for this option, it is normal that we have the main account that we will only focus on the development of military power and one or several secondary cities that we will focus on obtaining basic resources.

The main account is the one that will be part of the alliance and the secondary accounts keep them outside the alliance to be able to attack them and thus obtain their resources. If you have heard correctly, we will attack our “farm cities” to obtain the necessary resources.

For this reason, it is very important that in farm cities we do not raise the level of building the warehouse, as this is responsible for protecting resources from attacks.

Within the farm cities, we will build production buildings and develop technologies for the most efficient collection of resources. If we have one or more of these cities next to our main city, they will serve as the permanent supply of resources to our main city.

Avoid clashes with alliances and strong players, focus on attacking the weak. If you want to survive in the Last Empire War Z, it will be essential that you do not face the strongest players or alliances. If you do, your city will surely be destroyed.

On many occasions, we want to take revenge for an attack, but this can have fatal consequences. What gives better results to survive is to go as unnoticed as possible.

Maintain the Right Resources in the City

We must maintain the right resources in our city so that they are not worth attacking us, that is, even if they attack us they can not steal resources from us. For this, it is a good idea to maintain a high level of the warehouse since it will be in charge of protecting our resources.

In contrast with weak players, we will not have problems, so we can attack them to get resources. It seems somewhat cruel, but let’s not forget that we are trying to survive in a hostile world.

Maintain the Balance with your All Resources

The word balance is one of the keys to the game. You must maintain the balance within your buildings, troops, resources, etc. Look for the development of your main city to be balanced, do not leave buildings without leveling up or forgotten technologies without evolving.

What is Troops Management in the Last Empire War Z?

As for the troops, each type of unit is effective against another specific type of unit, so keep units of different types within your army. Depending on the enemy’s troops, choose which units will be more effective and use them.

It is very important to prioritize the study of some technologies in our city, one of the most useful is the so-called “Legion”.

This technology allows us to have several troops attacking or collecting resources simultaneously. Intelligently manage your resources, try to balance the expense so you do not run out of resources.

Another fundamental aspect to evolve faster is to kill zombies, participate in events and complete secondary missions. All this will give us great rewards that will help us accelerate the development of our city.

How to get Rewards by Missions in the Last Empire War Z?


One of the simplest missions is that of the loudspeaker, which is activated every certain period of time. We just have to click on it and we will receive a reward immediately.

How to get Rewards by killing Zombies? 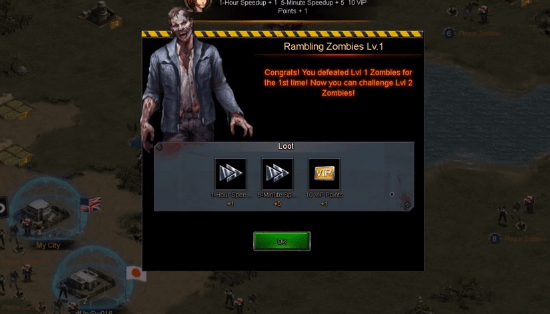 Another way to get good rewards is to kill zombies, especially high-level ones, although this will take a while. By killing these zombies we can get objects that we can then combine to create objects that will give us better rewards.

You have to play the last empire war z game with full attention and patience. You have to give dedicated time and follow our last war empire z guide to win the game and get unlimited resources and rewards.

If you love our last empire war z guide then you can give feedback in the comments.