These monster warlord guides will help you to play easily, climb level fast, and much more.

In monster warlord, the beasts are divided according to four elements; earth, water, sea, and fire. During several missions and battles, the currency will be these, a currency that we will use as barter for more monsters and hybrids (a mixture of two monsters that as a result give a much stronger creature). 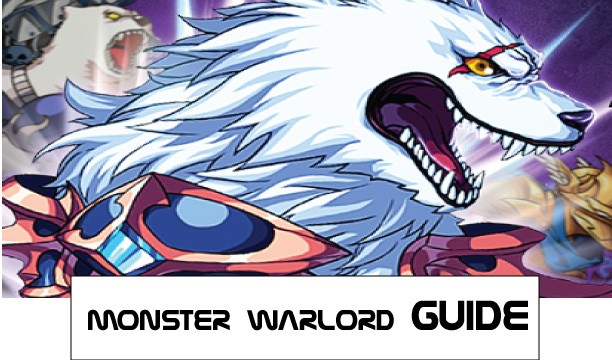 A group can consist of six different monsters and the game will select the strongest automatically. But this process requires some energy, a consumption that can be adjusted according to the preferences of each player. No need to worry because in a certain period of time it is automatically loaded.

Monster Warlord seems, at first glance, somewhat confusing. However, you will be able to navigate without a problem as you use the game. It only takes a little time to easily understand the functions it has. The design is very vibrant, something that makes it stick with this type of hobby, which often falls into somewhat worn formats.

When you use the multi-game feature in Monster Warlord, you obviously need an Internet connection. It is good to know that the consumption of data is actually very low and will not undermine our monthly volume. The application worked very smoothly and was very stable during our analysis. There was only one moment when he could not connect, but the older of this occasional failure did not reveal any problems.

Monster Warlord is free and available in the Google Play Store app center. Like most similar games, the user can improve their game by buying extras and improvements for the app. In this case, Monster Warlord can be seen from two points of view. While the casual player does not need to spend money on this game if you really get hooked and become ambitious by winning and overcoming the battles you can invest a lot of money.

Below Monster Warlord beginner guide will help you to explore the complete game easily. So if you want to play this game efficiently then follow our guide:

There are several statuses and levels of games. These can also be regulated. Attack, defense, health, and resistance are the categories we are talking about.

The first three are the decisive factors in the fight against other players. The last, resistance, determines rather how often we can attack our opponent.

Each player can call the fight or join a battle that another member of the group has started. Those who choose to start their own battle can place several players on a list and select who they want from allies during the battle. It is undoubtedly a good opportunity to ask for help from more powerful and strong players.

In the game and in each ‘army’ there is a boss. When he is defeated, he needs 24 hours to be completely dismissed, so each player must continue executing actions with the boss who no longer has strength, resistance, etc.

The level of resistance is what is really more restrictive, and is that you can only attack in a short period, before having to wait for this quality to recharge. Above all is a superior figure, the world leader. He can be challenged, along with other players, and try to beat him.

Although it should be mentioned that the more players face this world leader, the less chance of getting a reward there will be. However, to fight against bosses it is advisable to do it in a group, it is easier and faster.

Upload all skill points to ENERGY

Tip: Leave yourself a maximum of 65-70 in stamina to complete daily quests (Tower of Masters, battles x10 )

Climb All the Skill Points in AGUANTE

What is the best method?

Vale is easy to prove; let’s say that we have 1000 skill points, we would get 500 in stamina (2 skill points is 1 stamina), we spend in battle those 500, and let’s say that we get an average of 6 experience points per attack. We would multiply 500 by 6 and we would obtain 3000 points of experience; instead, if we pass all those points to energy, it would be 1000 energy points and each mission gives us 200% more experience.

Therefore we would obtain 2000 experience points. As you can see there are 1000 experience points in the game, the difference is that to spend so much resistance it is necessary to be 20 minutes giving it to attack, and to spend the energy it is enough with a couple of minutes.

Monster Warlords allows you to select a class. There will be different benefits for each class:

You can choose either Ranger or Fighter. Using Energy or Stamina to earn additional gold is the key weakness of Tycoon. We think, however, that Fighter has a higher chance of lasting longer. The stamina needed to fight bosses and attack others is stamina.

This game relies heavily on alliances. You should appoint alliances as early on as you can. Upon leveling up you will be able to continue boosting your battle power. There are five additional monsters per level available to each alliance. The additional five alliance members can be enabled at each level.

The core of any game is its monsters. A wide variety of monsters can be fought and collected. Your battle stats are calculated based on the number of monsters in your alliance. It is primarily through quests that you will find your monsters, although monster eggs and monster combinations can also be found.

Each level up or mastery of the ranked events earns you one status point.

Weak -> Attack: Enhance your chances of attacking another player and causing more damage during boss battles.

Health: Boost your health points to their maximum pool.

Weak ->Defense: Your chances of winning will increase when you are attacked by another player.

Energy: Quests are completed with energy.

Gems and gold can be earned from the World Boss in the game.

As you deal damage to the reward pool, you will earn gold. There are different reward pools for bosses versus their HP pools, depending on the boss. There is something rewarding about facing certain bosses over others.

You should look at the bounty list regularly. In PvP, players may post targets that are really easy to hit for their own benefit. You can win gold and EXP by punching those weak “punch bags”.

2.Buildings that are passive

You should use your gold to complete your army at the start of the game. You will get a better return on investment from Gold if you fight frequently and wear your stamina out.