We provide the best heroes guides for Realm Defense game.

The realm defense: Hero Legends TD has become one of the best defense games of the tower, the diversity of strategies that can be performed are diverse. Many of them will depend heavily on the level of our heroes, as well as the type of skill you possess. 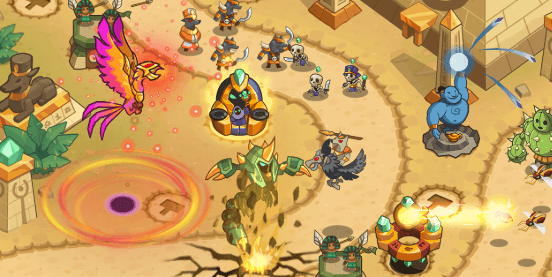 Therefore, it is clear to know in depth the skills and characteristics of different heroes. One can be better than another, but employing a good strategy focusing on your abilities could give good results. So follow our realm defense guide for good experience.

Unquestionably it is our first heroine, it’s precision arc will allow us to attack enemies from a very long distance.

This heroine will be with whom we will have a good time of experience, it is not recommended to keep them in the path of the enemies, it is very effective even at a distance.

The ability we can control is based on the invocation of a wolf. It really does not go down much, besides that it only focuses on individual attacks. The recommendation is to use it when our enemy crosses the field without taking damage, while you assign another hero to help. This is the first point in realm defense guide.

He is an unquestionably powerful warrior when it comes to hand-to-hand fighting. Being the second provided free, can cause large amounts of damage, also helps stop the enemies.

Its main skill is the use of protection identified with a shield, which protects all units and heroes when activated. Also heals all the troops that are around him.

It is accompanied by an explosive that supports you at all times. Hogan makes very good company with the swordsmen, his swivel sword allows attacking several enemies at the same time, while the swordsmen concentrate the enemies.

Its ability “Bacon toss” allows throwing to its companion to cause great damage in an area, with an explosive action that makes the difference.

A strong and resistant creature created with rocks and crystals. The only ability we can control is the pointed rocks that protrude from the ground causing great damage.

In addition, it has different abilities of great utility, this without a doubt the strongest one that our first hero, by the damage that it produces and the type of skill that attacks at a distance stunning to the great part of the enemies.

Characterized as a ninja, his speed is his main strength. Its sharp sword takes advantage of its lightness to bleed enemies reducing its life more quickly.

He is a magician who dominates the power of thunder. His specialty is the rays made at a distance.

Having a good level you can take a powerful beam to drop it in a group of enemies. Additionally, you can place a cloud electrically charged by grabbing multiple and continuous damages.

An aerial hero, ideal to enter the tournaments, its wings allow it to be unreachable for practically the most enemies.

Its swirl is believed by its wings, a passive skill that passes through the path of enemies. While their best and most powerful ability is to throw meteorites, it is advisable to throw them at grouped enemies.

A heroine who knows how to identify perfectly with nature. She likes rabbits earning the confidence to call them to battle at any moment, to such extent to sacrifice in battle producing an explosion.

Their skills include invoking bunnies that help them eliminate different enemies located on the map.

His friend is cold and uses all his cold skills to get rid of your temperature. Use the cold to damage enemies.

His skills are focused on ice-lacing, freezing and causing damage. Its effects that produce in the slowdown and freeze so that units of land or towers take advantage to lower your life.

She is a malevolent buffoon, her ability to influence enemies is high. His passive ability focuses on removing a hammer to cause damage while taking advantage to stun enemies.

In addition, its main ability is to cause damage and scare limited enemies to flee. It does not cause great damage, but if it manages to obtain some time so that in company with other heroes they eliminate the enemy units.

In realm defense guide, you can get a complete list of heroes and explore them easily.